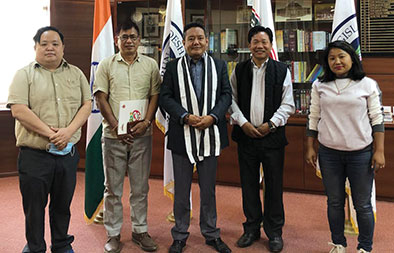 ITANAGAR, 17 Feb: The Arunachal State Badminton Association (ASBA), headed by its secretary general Bamang Tago called on State Assembly Speaker PD Sona on Wednesday and had a detail discussed regarding the development of badminton across the state.

They also discussed on day-to-day regulatory methodology of the MLA Cottage indoor badminton hall to ensure safety of MLAs. In this regard, a tri-party meeting with director sports, government of Arunachal Pradesh, secretary Arunachal Pradesh Legislative Assembly and ASBA secretary general will be held to work out a mechanism to regulate the said badminton hall.

In the meantime, the ASBA informed that it is all set to organise the 2nd sub-junior and junior state ranking badminton tournament 2021 at the MLA Cottage indoor badminton hall from 19 to 21 February, in which 14 affiliated district units are participating, including Sangay Lhaden Sports Academy and Capital Complex Badminton Association.