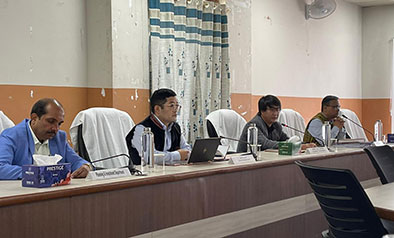 TAWANG, 17 Feb: “Zonal and regional pre-budget meetings are being convened across the length and breadth of the state on the directive of Chief Minister Pema Khandu and Deputy Chief Minister Chowna Mein for a productive, efficacious and people-friendly budget”, said Advisor to the departments of Planning and Investment and Rural Works, Jambey Tashi.

He was speaking at the maiden zonal pre-budget consultative meeting with CBOs, RGU, chamber of commerce and other bodies at the DK convention hall here on 17 February.

He also urged the house to pour in ethical feedback to prepare a three to four year master plan for comprehensive development of every sector.

Tashi informed that the devolution of the Centre’s share has been reduced and the state has received Rs 6,580 crores and is expecting Rs 8,842 crores soon.

“Despite the deduction of the Central share affecting the financial situation of the state at large, backlog of Rs 1,900 crores created during the last financial year has been cleared during SIDF,” he notified.

“Rs 400 crore has been meted out to upgrade health infrastructures; PRI and municipal elections have been conducted successfully; the execution of the four-lane highway is being worked out on war footing; the Potin-Pangin road has been tendered and all-weather road to every district headquarter is in the pipeline,” Tashi said.

Briefing on the current power scenario of majority of districts, he emphasized on the need to tap and back small and micro hydel power projects on mission mode.

“Judicious use of funds is the base of development and PRIs and CBOs may be included in the monitoring committees,” the Lumla legislator opined.

He also called for discussions on unused and defunct government buildings like tourist lodges and cafeterias on priority.

“Sectors like agriculture, horticulture, tourism, youth empowerment and fisheries need to be emboldened and boosted,” Jambey, who is also the national member of BJP national minority morcha, concluded.