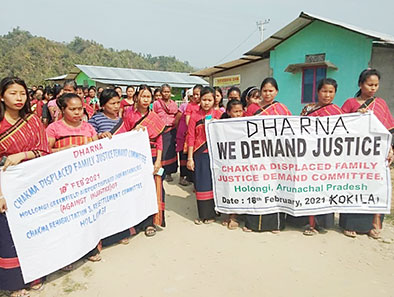 ITANAGAR, 18 Feb: The Chakma Displaced Family Justice Demand Committee (CDFJDC) has claimed that Rs 19 crores have been siphoned off from the rehabilitation grant of the Chakma families displaced by the construction of the greenfield airport in Hollongi near Itanagar.

The CDFJDC has filed an FIR against anomalies with the Balijan police station on Thursday, wherein more than 80 displaced family members are signatories.

The committee further claimed that a 12-member Chakma Rehabilitation and Resettlement Committee (R&R Committee) was formed under the advice of the Papum Pare deputy commissioner to oversee and ensure smooth implementation of various activities under the scheme.

It further alleged that the R&R Committee had paid the amount to some non- beneficiary people who are the kith and kin of the committee members.

“The deputy commissioner of Papum Pare district made payments to the R&R Committee in their recurring bank accounts maintained at the Punjab National Bank, Itanagar branch. The R&R Committee has embezzled over Rs 19 crores,” it alleged.

The committee also claimed that the houses built under the scheme are of substandard quality and the walls are developing cracks after a week of them taking over.

Seeking police intervention, it further claimed that the scale of anomalies is in crores with several incidents of procedural lapses on the part of the R&R Committee. It is said that there are more than 150 Chakma families who were displaced by the greenfield airport project at Hollongi ever since the district administration started carrying out the land acquisition process in 2012.

The Chakma refugees are being allowed to settle in designated settlement areas at Hollongi and Kokila in Papum Pare district.

“We are poor villagers. You have taken away our land. We lost our livelihoods and we are without income. Our future is in the dark and insecure. The Hollongi greenfield airport has turned disastrous for us,” the displaced Chakma families stated.

The R&R Committee president, Bijoy Ranjan Chakma denied the allegation and claimed that the R&R scheme is still at the implementation stage. However, he refused to disclose the total amount under the Rehabilitation and Resettlement Scheme.

This daily was unable to reach the Papum Pare deputy commissioner for his reaction on the accusation of anomalies in the rehabilitation process.