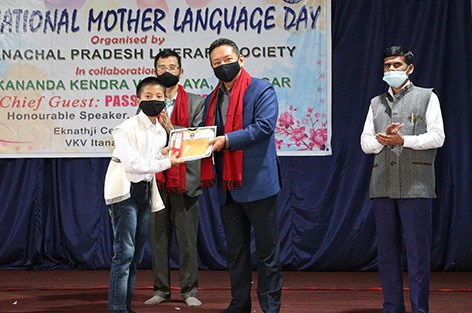 ITANAGAR, 22 Feb: Legislative Assembly Speaker Pasang D Sona on Monday gave a clarion call to the people of Arunachal, especially its youths, to preserve and protect their mother languages, which he said “are under serious threat due to changing situations.”

The speaker was addressing the International Mother Language Day celebration organized by the Arunachal Pradesh Literary Society (APLS) in collaboration with the Vivekananda Kendra Vidyalaya (VKV) in Chimpu.

“Mother language is the route map of our culture because it tells us who we are, where we have come from, and where we are heading to,” Sona said.

“Loss of culture is loss of identity; similarly, loss of language is the greatest loss any society can suffer,” he said, and stressed on the importance of preserving one’s mother language.

“Learning other languages is good as it connects the people, but one should never forget their own mother language as it is our identity,” the speaker said.

Urging parents to ensure that their children learn their mother languages in these changing times, he said, “Until and unless you know your own language or dialect, you won’t be able to follow your culture.”

The speaker also pitched for documenting the state’s mother languages for the future generations.

Sona further urged students to cultivate the habit of reading, and announced to provide fund for buying books for the VKV’s library.

APLS executive president Batem Pertin dwelt on “the challenges, consequences and other issues pertaining to mother language in the state.”

Expressing serious concern that most of the younger generation have stopped learning their mother tongues, he called for “necessary collective steps from elders to safeguard the mother languages from extinction.”

The programme also featured a storytelling competition in different dialects of the state, and colourful cultural presentations by the students of the VKV. (Speaker’s PR Cell)