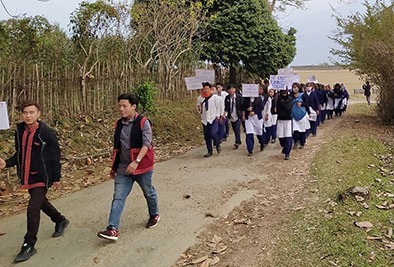 JENGGING, 26 Feb: A peaceful bandh was imposed in Jengging block of Upper Siang district by the students of the government higher secondary school (GHSS) here, with support from the district unit of the Adi Students’ Union and the public on Friday.

The bandh saw the closure of the market area, and a chakka bandh was also imposed in the area.

The bandh was imposed over not posting senior teachers for subjects like economics, Hindi, political science, history, etc, to the GHSS. The students demanded posting of the aforesaid subject teachers within a month, failing which, it said, it would impose a second phase bandh.

Jengging EAC (in-charge) Philip Jerang assured the people that the matter would be looked into immediately. He announced that an inquiry committee would be formed, and that the public’s grievances would be conveyed to the higher authorities. (DIPRO)