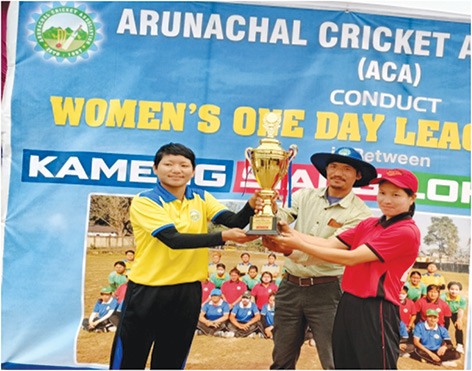 DOIMUKH, 2 Mar: The Arunachal Cricket Association (ACA) conducted the Mingle Trophy-2021 tournament, especially for the ACA’s women players, at the PDCA cricket ground here in Papum Pare district, ahead of the commencement of the BCCI’s domestic one-day league tournaments.

Four teams – Kameng, Siang, Lohit and Subansiri – participated in the tournament from 23 February to 2 March. Siang and Subansiri emerged the joint winners.

In the final match, Siang and Subansiri played for 20 overs each in view of the rainfall in the early morning. Siang won the toss and elected to bat first, and set a target of 120/9 runs in 20 overs.

As the last over of the first innings was underway, heavy rainfall interrupted and match referee Taha Atu declared the match result as abandoned.