ITANAGAR, 5 Mar: The latest report from the health department states that a total of 34,881 people in the entire state have received their first dose of Covid-19 vaccine, while 9,323 of them have been administered their second dose so far.

The data includes healthcare workers (HCW), frontline workers (FLW) and beneficiaries who are aged 60 years and above, and those above 45 years with comorbidities.

Currently, of a total of 61,439 HCW beneficiaries, 14,957 have received their first dose of Covid-19 vaccine, while 9,104 of them had received the vaccine’s second dose till Friday.

Also, a total of 500 beneficiaries aged 45 years and above with comorbidities have also received their first dose.

However, he admitted that there are still a number of people who are hesitant to get themselves inoculated. Dr Padung stated that, despite the reluctance, there is progress, especially among the HCWs and the FLWs.

“Till Thursday, the average vaccine coverage among HCWs and FLWs was around 62 to 63 percent. We are hopeful that the numbers will increase in the coming days,” he added.

Dr Padung informed that, ever since the rollout of the vaccination drive on 1 March for people aged 60 years and above and people who are 45 years and above with comorbidities, the department has recorded increased participation, especially in East and West Siang districts.

“The number of people turning up for inoculation has improved in West Kameng also. Overall, hesitancy among people has lessened overtime and there is eagerness among many to take the vaccine in other districts also,” he said.

Dr Padung further informed that the state has not recorded any cases of adverse reaction to the Covid-19 vaccine. 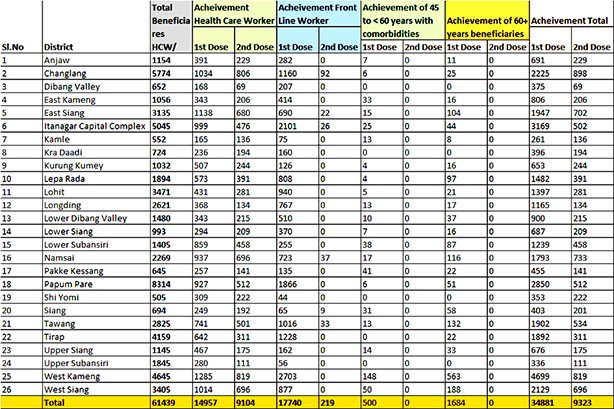