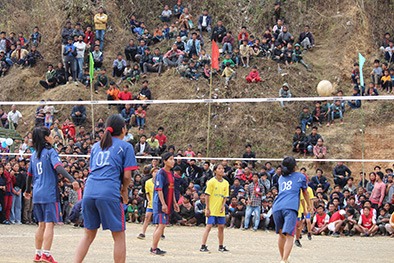 PONGCHAU, 8 Mar: A circle level volleyball tournament themed ‘Play for peace and unity’, which was conducted by the Chingtai Club in collaboration with the Pongchau Students’ Union, concluded with distribution of prizes to the winners and runners-up teams in a colourful closing ceremony here in Changlang district on Sunday.

The Bonai Village team won the tournament in the boys’ category, while in the girls’ category the winner was the Nyamjee Team (Pongchau).

“The main motive behind organizing the tournament was to spread the message of peace and unity in the region, as well as to pay tributes to four legendary volleyball players of the region: Kapwang Wangsa, Towang Wangsa, Jongan Wangsu and Wangow Wangsa,” the organizers said in a release.

Attending the closing ceremony, Wakka ZPM Ganchai Gangsa appealed to the youths to actively participate in games and sports along with their routine academic studies. He assured to encourage and support such events in the region.

On 2 March, the tournament was declared open by Pongchau ZPM Laitoh Wangsa.

Eighteen teams – 10 boys’ and eight girls’ -participated in the tournament.

The opening match was played between Konnu team and Chingtai B, in which the former won the match.