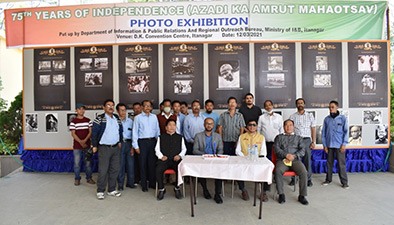 ITANAGAR, 12 Mar: To commemorate 75 years of India’s independence with the theme ‘Azadi ka Amrut Mahotsav’, a series of events are being organized all over the nation. Arunachal has also joined the rest of the country in the celebration, which began on Friday.

In order to mark the historic salt satyagraha, the education department organized an event reenacting the famous ‘Dandi march’ from Dera Natung Government College (DNGC) campus to Akashdeep complex (Ganga market) and back to the college campus on Friday morning.

Dressed in their traditional attires, more than 300 volunteers from Assam, Sikkim, Nagaland, Manipur, Tripura and Mizoram, besides host Arunachal, participated in the foot march led by the DNGC principal and other faculty members.

NSS volunteers from the entire Northeast region are here in the state capital to participate in the North East NSS Festival, which is on at DNGC since 8 March.

The ‘yatra’ culminated in a function at the college auditorium. Various issues related to environment protection, cleanliness drives, water harvesting, drug abuse, yoga and others were touched upon during the programme.

The Dandi march of 1930 was a part of Mahatma Gandhi’s non-violent protest against the salt law imposed by the British and was a landmark in the history of the Indian freedom struggle. As a part of the civil disobedience movement against the British rule, 80 satyagrahis, led by Mahatma Gandhi, marched 241 miles from Sabarmati Ashram, Ahmedabad, to the coastal village of Dandi to break the salt law on 12 March, 1930.

At the national level Prime Minister Narendra Modi flagged off the 25-day-long iconic Dandi march by 81 people from Sabarmati Ashram, Ahmedabad, to launch the nationwide celebration of the 75th anniversary of India’s independence.

In West Siang HQ Aalo, a 5.2 km march for ‘freedom and unity’ was flagged off by DC Moki Loyi on Friday.

Heads of offices, public and students turned up for the march that started from Gumin Kiin to Kabu and back to Gumin Kiin. The march was by led by an IPR vehicle with a PA system mounted on it, playing patriotic songs all along the way.

Addressing the gathering, the DC said that the programme conceived by the government of India is a long-drawn one that will go on till the attainment of the 75th year of India’s independence.

Essay writing competitions were conducted at all the colleges and schools of the district.

The Tawang DA organized a cultural programme and distributed prizes to the winners of the essay writing competition to mark ‘Azadi ka Amrit Mahotsava’ in Tawang district.

DC Sang Phuntsok distributed the prizes to the students and congratulated them.

In Dibang Valley HQ Anini, 202 people participated in a cross country race organized there on Friday.

With a 17 km route, starting from the DC office and culminating at the Amuli village bridge point, the race was flagged off by ZPC Theko Tayu. It was organized by the district administration in collaboration with the Indian Army, under the ‘Nasha mukt Bharat’ initiative, as part of the ‘Azadi ka Amrut Mahotsav’.

The Itanagar capital region (ICR) district administration conducted a painting competition on the theme ‘Pictorial scene of Dandi march’ on Friday in all the government secondary and higher secondary schools of the ICR as part of the ‘Azadi ka Amrut Mahotsav’.

Along with the painting competition, a symposium on India’s freedom struggle among the students of the higher secondary school, and an essay competition on the same theme was also conducted.

Deputy Commissioner Komkar Dulom lauded the students for their performance and expressed hope that “competitions on such themes would help students realize the supreme sacrifice made by the freedom fighters for our independence.”

In Lower Subansiri district, Deputy Commissioner Somcha Lowang and all the administrative officers visited the Grace Rehabilitation Centre run by the Apatani Baptist Association Ziro, and Mother’s Home for the destitute in Achu Kuru as part of the ‘Azadi ka Amrut Mahotsav’ and to reach out to the most deprived people in the society.

“When the whole nation is celebrating the pre year of the 75th years of our independence, this is an opportunity to include specially-abled children in the celebrations,” Lowang said while interacting with the inmates and caretakers. She distributed sweets and provided rations to both the centres during the visits.

In Pasighat, ADC (HQ) Tatdo Borang on Friday inaugurated a five-day photo exhibition by the Field Outreach Bureau to commemorate the celebration of 75 years of the country’s independence at IGJ Government Higher Secondary School (GHSS).

Borang advised the students to closely watch the exhibited photos of the freedom fighters and learn about their lives and their roles in India’s struggle for independence.