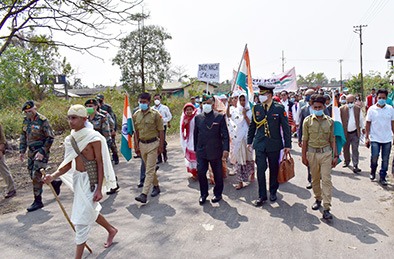 He was accompanied by public leaders, including local MLA Ninong Ering, government officials, youths, students and people from all walks of life.

The governor, who is a member of the national committee for ‘Azadi Ka Amrut Mahotsav’ celebrations, exhorted the people to celebrate the 75 weeks long mahotsav in a befitting manner.

Reiterating the message of Prime Minister Narendra Modi, the governor said that “this celebration stands on five essential conceptual pillars. These are freedom struggle, ideas at 75, achievements at 75, actions at 75 and resolve at 75. For us, the Arunachalees, these pillars are the ideas and feelings of our 13,83,727 men, women and youths as part and parcel of 130 crore Indians.”

Recalling freedom fighter Matmur Jamoh, a son of Arunachal’s soil who refused to bow down to the British and breathed his last in Andaman’s cellular jail, where he was lodged after killing a British officer, the governor said that “we the Arunachalees had substantially contributed in India’s freedom struggle.”

He emphasized on “recalling the sacrifices of every Arunachalee to the freedom fighter to the knowledge of the present generation.”

The governor said that there are people who for generations have been performing great work for the sake of the nation. “Now it is time to recognize their contributions, thinking and ideas for giving fillip to the nationalistic efforts,” he said. (Raj Bhavan)