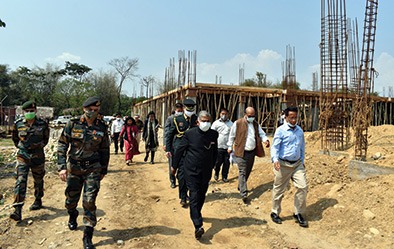 Mishra, who has been closely monitoring the development of the school since its inception, assessed the infrastructural and other physical advancement of the school along with members of the local board of administration (LBA) committee. He also reviewed the preparations for the coming academic session, including the financial allocations, student-teacher ratio and other requirements of the school and the teaching staff.

The governor strongly advocated that “the cadets of the school must be provided with the best education and opportunities for sports, games and extra curriculum activities.” He urged all stakeholders to put in sincere and concerted effort for the success of the school and the cadets.

The governor expressed deep concern regarding the lodging and boarding provisions for the cadets when the next academic session commences. He stressed that the education department and the construction agency must work on a war footing to meet the dateline, while suggesting that “multipronged work must be attempted.”

The governor suggested that the LBA committee must actively carry out its responsibility for the betterment of the institution, while the state government should ensure timely and early availability of funds for the infrastructural development of the school.

He also called for regular on-the-spot visits by the LBA committee members and the district administration for obtaining firsthand information on the progress of infrastructural work at the site.

The governor said that “the cadets of the day are the potential future members of the Indian armed forces. By providing a strong foundation for them, we are building a strong line of defence for the nation.”