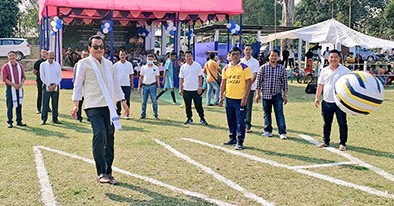 NAMSAI, 13 Mar: Deputy Chief Minister Chowna Mein kicked off a football tournament being organized by the All Namsai Area Youth Association (ANAYA), with the theme ‘Stay fit & healthy, say no to drugs’, to raise awareness against drugs and their ill-effects, here on Saturday.

“Youth are our assets for brighter Arunachal Pradesh,” said Mein, and informed that the state government is working tirelessly to address the aspirations of the younger generation.

He said “growing drug addiction among the youth is a matter of concern for all of us, both as policymakers as well as responsible parents.”

Mein urged the youths to shun consumption of drugs and take the responsibility of creating a better society.

“The fight against drug abuse should involve multi-faceted policies and processes,” said the DCM, and added that the government has taken a decision to address it “comprehensively and holistically, that will involve

prevention, intervention, treatment, rehab and integrating the abuser back into the society.”

He said strict action would be initiated against government officials involved in any drug-related activities in any form.

The DCM commended the efforts of the ANAYA to raise awareness about drug abuse among the youths through sports.

Namsai MLA Chau Zingnu Namchoom said “the government is focusing on preventive measures, so that our children do not become victims of addiction. We must provide our youth with the knowledge, skills and opportunities for them to excel in life.”

He said “there is a need to create awareness about drugs and maintenance of vigilance by the people.”