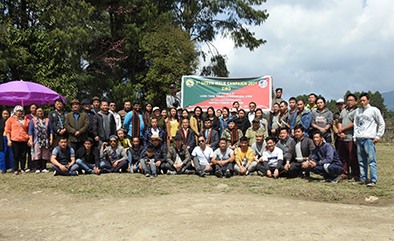 ZIRO, 16 Mar: Around 500 saplings of different species like Cupressus, Cryptomeria, Cedrus deodara and Thuja were planted as part of a ‘green walk’ campaign at Pechi Putu, the venue of the famous Ziro Festival of Music, on Tuesday.

The core idea behind this campaign is to plant ornamental plant species which are not only unique to the area but add a special identity to it.

It has been seen that plantations close to the WRC fields in the area have had limited success on account of apprehension among the public towards the future trees affecting their crop output. This campaign also aims to allay such fears by planting species that do not harm the crop production.

Moreover, plantation of local cherry species, known as semo in the area, will prove to be a great attraction for tourists in the spring season.

Hapoli Forest Division DFO Abhinav Kumar said his department is always ready to provide saplings free of cost, along with technical assistance, as and when required, and advised the youths to take proper care of the planted saplings to ensure their growth.

The DFO said the Hapoli forest division is planning to organize a series of plantation drives in various suitable places, and advised the range officers to maintain good stocks of saplings. (DIPRO)