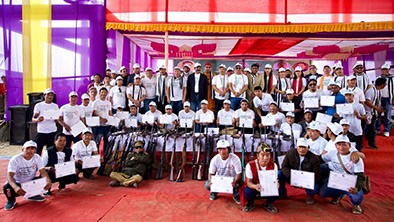 The event was organized by the Debeyor Socio-Cultural Welfare Organisation and supported by the environment & forests department.

More than 46 airguns were voluntarily surrendered during the event by individuals, including former AAPSU president Kamta Lapung. Certificates of appreciation were issued to each individual by the department.

The East Kameng Social Welfare and Cultural Organization, the All Arunachal Pradesh Students’ Union, bird-watching experts and the villagers took part in the programme.

“The campaign will be carried out in other parts of the state, involving all stakeholders, such as village elders, GBs, youths, student leaders, NGOs, the civil society and the district administrations, to stop unabated hunting of wild animals,” Natung informed.

“We should be ashamed of ourselves. In spite of having a large forest-covered area, the birds and wildlife population are alarmingly decreasing,” said Natung, and urged all stakeholders to “shoulder the responsibility of creating awareness on protecting and conserving wild animals and forests.”

“The reason why I am starting this campaign is that we hardly found a single bird along the roadside when we drove from Itanagar to Seppa. It is a sign that the birds’ population is vanishing at an alarming rate,” the minister said.

“With this alarming decrease of the birds’ population due to unabated hunting, the days are not far when we would have to tell our children about many bird species only through documented photography or through drawing,” Natung said.

“I do hope the people of Arunachal would come forward to support this campaign as we are doing it for a better future and for our future generations,” Natung added.

He asked the district administration to put a blanket ban on sale of airguns and its bullets by the authorized arms licence dealer in the district.

MLA Kumsi Sidisow, who accompanied Natung, urged every stakeholder to cooperate in making the conservation campaign successful. He said “the wildlife conservation buzz should reach the global stage,” and informed that the village forest management committee would be entrusted to carry out the campaign at the village level.

Principal Chief Conservator of Forests RK Singh urged the deputy commissioners and divisional forest officers to ensure that the campaign reaches every nook and corner of the state.

Taking part in the launch programme, EKSWCO chairman Bharat Sonam stressed on the role of women in conserving wildlife. He opined that “if every housewife refuses to cook wildlife meat in their kitchen, wildlife can be protected.”

“The government should have adopted a mechanism to protect the flora and fauna, and I hope all legislators would spread the message in their respective constituencies,” Sonam said.

He said the traditional hunting practice is not as grave a threat to the wildlife as is the use of airguns and other modern hunting weapons.

“Officers should come forward to surrender their guns and to conserve the wildlife,” Sonam said, adding that many government officers possess powerful air rifles.

Bird watcher Lobsang Tsering from Dirang (West Kameng) presented his account of documentation on birds’ population. He also dwelt on birdwatching as a potential avenue in the tourism sector.

The environment & forests department has roped in two former Miss Arunachal, Osin Mosu and Roshni Dada, as brand ambassadors of the campaign. Mosu and Dada would be promoting the campaign across the state.

Though there is no written report on the birds’ population in the state, the department said the birds’ number is decreasing at a worrying pace.

“There’s no written report. Decreasing report is only on visual observation, like hornbills, which were common once in the ’90s in Tippi and Bhalukpong areas are hardly seen these days,” said Deputy Conservator of Forests (Wildlife) Millo Tasser.