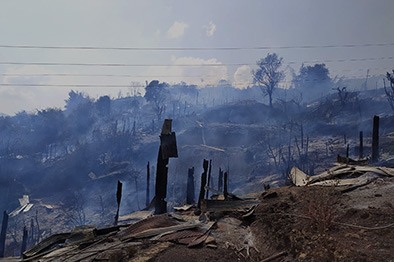 LONGLIANG, 18 Mar: A 60-year-old man and a five-year-old girl were killed in a massive fire that broke out in Longliang village in Lazu subdivision of Tirap district at around 11 am on Thursday.

The fire that lasted till about 12:30 pm also gutted down 114 of the total 139 houses, and damaged several small shops nearby.

As per reports received from ground zero, Lazu EAC (in-charge) DK Thungdok informed that, though the fire brigade along with a team of the Tirap police rushed to the spot, they were unable to save much of the properties as the inferno spread quickly.

The cause of the fire is yet to be ascertained.

Tirap Deputy Commissioner Taro Mize informed that essential commodities like rice, salt and potatoes have been sent through a special relief team from the DC’s office in Khonsa, located about 45 kms away.

The DC has also appealed to all to render help to the fire victims on humanitarian grounds.

The DC, the SP and HoDs will be visiting the fire victims and the bereaved families on Friday, along with relief items.

The EAC (in-charge) informed that relief items have been received from the Tirap district administration, Lazu ZPM Rangmo Ranto and villagers of Pongkong. (With DIPRO input)