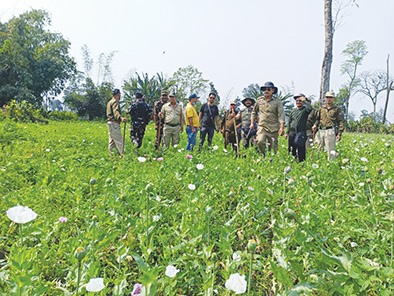 ITANAGAR, 19 Mar: The State Narcotics Control Cell/Board under the supervision of state nodal officer (narcotics) Oli Koyu and in collaboration with the Lohit district administration, the tax, excise & narcotics department, the police and the environment & forests department conducted an operation to destroy illicit poppy cultivation.

The operation started on Tuesday and concluded on Thursday. Approximately 1,903 hectares of illicit poppy cultivation were destroyed in Khado, the Turung forest reserve, Medo, Manyuliang, Meketliang, and near Wakro village in Wakro circle of the district.

Speaking to this daily, Koyu informed that this was the first time that local officials independently conducted an operation to destroy poppy cultivation.

He said all the areas where poppy was being cultivated have been properly mapped.

“The government is trying to provide alternative source of cultivation to the farmers. Therefore, wherever we have conducted operation, we have mapped it,” he added.