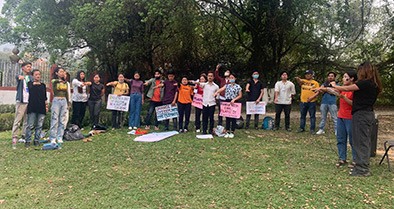 ITANAGAR, 19 Mar: A sizeable number of young climate activists under aegis of Fridays for Future (FFF), Arunachal unit took out a rally as part of their climate strike with the slogan #NoEmptyPromises.

The peaceful march, which started from Akashdeep and culminated at IG Park here, was organized in collaboration with the Youth Mission for Clean River and Green Media.

The activists took a pledge, vowing to protect nature and Mother Earth. They pledged to plant more trees, conserve water and use eco-friendly bags.

Welcoming the volunteers who joined the strike, FFF Arunachal unit coordinator Oyin Komboh briefed about the FFF and its movement. Activist Onam Perme highlighted the objectives of the peace rally.

Representing the Youth Mission for Clean River, SD Londa said that “people are not realizing that forests, environment and global warming issues are a bigger threat than any other issues on earth.” Londa opined that religious institutions should also start propagating the message about climate change and global warming at their institutions.

On being asked why the climate strike could not garner as much crowd as it should have, Londa quipped, “It’s hard to convince the crowd for a good cause without money. People are interested only in money-oriented issues.”

“Global warming is real; climate change is a real threat. We have to fight it. Our generation needs to understand this issue,” Londa stated.

The FFF also conducted a poetry competition on the topic ‘My pledge through poetry, on the theme ‘environment’.

The winners were felicitated and presented with certificates during the event. Wanggo Socia won the first prize, while Tenzing Meinkee and Norbu Jamchu Thongdok bagged the second and the third prize, respectively. Kaming Natung and Jon Pebi Tato won consolation prizes.