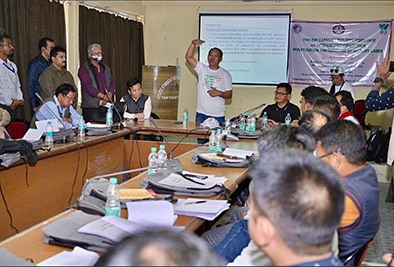 Field officers of the forest department, representative of the district administration and police officers of Papum Pare and Itanagar capital region took part in the workshop, which was inaugurated by Environment & Forests Minister Mama Natung.

Natung appealed to the participants to share ideas to contain wildlife crimes in the state. The minister also asserted that no wildlife crime would be tolerated, and asked the department to take strict action against offenders as per the law.

Natung had launched a voluntary airgun surrender campaign from his native village Lumdung (East Kameng) on Wednesday to stop unabated hunting of wildlife.

the scenario of wildlife crimes in India, the legal frameworks, and the role of the WCCB and other enforcement agencies. He also dwelt on the methods of poaching, trafficking and concealment, trade routes, transit points, collection points, etc.

Anirban Chaudhuri of the WCS highlighted the method of identifying species of commonly traded wildlife and their parts, while advocate Samir Majumder spoke about the legal provisions related to wildlife crimes in the Wildlife Protection Act, 1972, and other relevant provisions.

A mock court session, market raiding and vehicle search were conducted as part of the workshop.