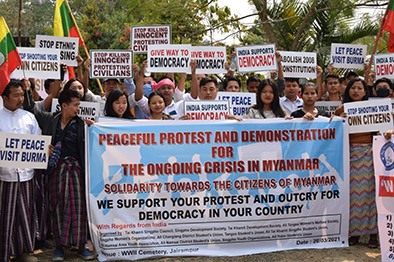 JAIRAMPUR, 20 Mar: At least 16 organizations from Arunachal and Assam congregated at the World War II cemetery here in Changlang district to protest against the reversal of democracy in Myanmar, which has led to widespread peaceful protests by the civilians and the military junta, also known as the Tatmadaw, brutally cracking down on the protestors, leading to over 200 deaths so far.

The coup d’etat by the Myanmarese military on 1 February deposed the democratically elected government of the National League for Democracy, led by Nobel laureate Aung San Su Kyi. Since the start of the coup, the people have been on the streets, demanding return of democracy and denouncing the military taking over of the reins of power after an experiment with democracy for about a decade after a long spell of the South East Asian nation being ruled by the military junta.

Now the military are trying to silence the voices of dissent and protests on the streets by using brutal measures which the world have been witness to for the past 50 days.

The protest is a first of its kind and is deemed to be a historic moment as these tribes reside on either side of the Patkai mountains and thus the crisis and turmoil in the neighbourhood is but natural to be a matter of concern for the brethrens living on this side of the mountains.

Apart from ethnic affinities, these tribes have many things in common and most of them are blood brothers.

Leaders and representatives of all the participating communities spoke on the occasion and they were unanimous in expressing their concern over the crisis in Myanmar. They appealed to the military leadership to let democracy and peace return in the country.

They also called upon the world leaders to intervene in order to make the military authorities come to terms with the aspirations of the people for peace and democracy.

The participants carried placards and banners which read ‘Abolish 2008 constitution’ (the constitution used by the military to suit their whims), ‘Stop killing innocent protesting civilians’, ‘Give way to democracy’, and ‘Stop ethnic cleansing’.

The three finger salute, which has become symbolic of the current protest in Myanmar, was also displayed by the protestors here.