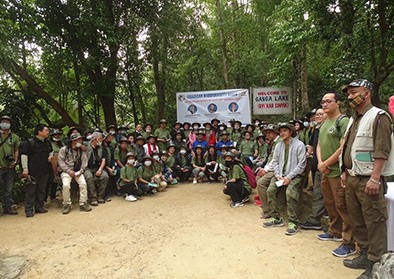 The participants were Biodiversity Management Committee members and research scholars and students from Dera Natung Government College, the NERIST and Rajiv Gandhi University, and officers from the Biological Park, Itanagar.

Thirty bird species were also recorded. They included the striated heron, the white-breasted water hen, the slaty bellied tesia and the black crested bulbul. Twenty species of butterflies, including species like the

MLA Kumsi Sidisow flagged off the walk in the presence of APCCF N Tam, senior forest officers, and the Ganga Lake Committee members.

Sidisow emphasized the need for “sharing such knowledge among various stakeholders to create mass awareness on the importance of biodiversity conservation.”

He commended the initiative of the board and appealed to every citizen to “contribute towards the common goal of conservation to maintain ecological balance in the state.”

APBB Chairman Tayek Goi informed that the board will organize such walks once every month in forested areas in and around the Itanagar capital region. He said such surveys would also help the board in identifying potential biodiversity heritage sites to be designated under the National Biodiversity Act, 2002.

APBB Member Secretary Koj Rinya informed that the findings would also help in “field authentication and augmentation of information available in the people’s biodiversity register (PBR) prepared out of secondary data.”

The PBR is an important legal document to ensure fair and equitable sharing of benefits to the locals, arising out of utilization of their biological resources for research and commercial purposes.