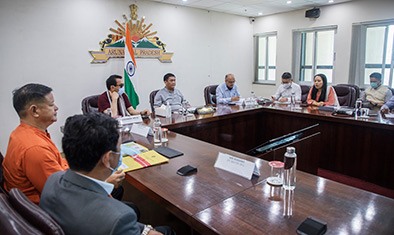 ITANAGAR, 22 Mar: Expressing concern over Itanagar being ranked as one of the dirtiest cities in the country, Chief Minister Pema Khandu on Monday called upon the Itanagar Municipal Corporation (IMC) to shoulder the responsibility of waste management with utmost sincerity.

Chairing a meeting here with the 20 newly elected corporators headed by Mayor Tame Phassang, Khandu said “the onus is on the IMC to revive the garbage disposal system and clean the image of the state’s capital city.”

Speaking about the almost complete four-lane highway in the city, he said that no amount of infrastructural development would suffice until the city is cleared of its garbage.

“As the IMC was defunct for the last two years due to various reasons, the in-place system of waste management went disarray. Therefore, the new team of corporators has a huge responsibility on its shoulders,” he said.

As per official records, Itanagar has a population of about 1 lakh-plus, consisting of 19,580 households in 20 wards. It produces about 50 metric tons of both solid and wet garbage daily.

Khandu suggested to the corporators, who have been in office for hardly a month, to sincerely attend the orientation and training programme being conducted by the urban development (UD) department in April.

He also advised them to visit a couple of cities that are successfully running waste management systems.

“Once you come back with the newly gained knowledge, suggest to the government a way forward and we will set a timeline to make Itanagar one of the cleanest cities in the country,” he said.

Meanwhile, Khandu said that the government would “work out a way” to make the waste management plant in Chimpu functional.

Phassang gave assurance that picking garbage and transporting it to the dumping or recycling plant would not be a problem. He, however, requested the government to make the defunct recycling plant in Chimpu functional, besides establishing dumping and landfill sites, one each for Itanagar and Naharlagun. He said the required land would be procured by the IMC.

To the proposal that waste management, from collection to disposal and recycling, may be handed over to an experienced and expert agency, Phassang said it was upto the government to decide.

The CM suggested that this could be included in the water bill collected by the PHE department, which has enough manpower for door-to-door collection.

Other issues like manpower, vehicle, etc, for the IMC were also discussed.