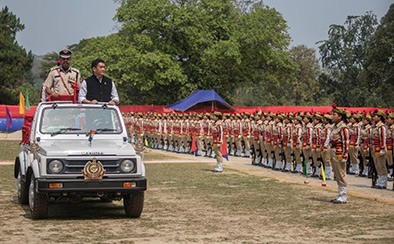 BANDERDEWA, 23 Mar: The passing out parade of the 47th batch of recruit constables of the Arunachal Pradesh Police (APP) and Indian Reserve Battalion (IRBn) was held at the Police Training Centre (PTC) here on Tuesday, with Constable Anita Siyum standing as the ‘all-round best’ in her batch.

A total of 1,034 trainees, comprising 766 males and 258 females, graduated on Tuesday with L/Ct Miggi Riba commanding the parade.

He also announced risk allowances for police personnel assigned on duties that involve risking their lives.

“The state police that initially started as a small force today has the strength of 15,000 personnel with 3,000 vacancies more to be filled,” said the CM.

He gave assurance that these vacancies would be gradually filled through the APSSB and the APPSC.

Stressing on the importance of training, the CM requested the home department to regularly conduct training for police personnel and make them fit for duty. He pointed out that whenever on a district tour, he found that the physical fitness level of many police personnel was not up to the mark. He, therefore, urged the department to regularly conduct physical training as well as other training programmes.

Highlighting drug abuse as the biggest challenge for the state, the CM said it is wreaking havoc on the lives of the young generation. He reiterated that police personnel found indulging in drug business and abuse would be dealt with strictly.

Khandu further assured to extend every possible help for modernizing the APP, including providing modern weaponry and vehicles.

The CM also inaugurated the new MT garage and long firing range at the PTC, and flagged off several vehicles.

DGP RP Upadhyaya stated that the 1,034 recruit constables have been provided with adequate exposure in the field of sports and taught about criminal laws, VIP security, disastrous effects of narcotic substances, human rights, etc.

The ceremony also included daring demonstrations by the APP STF, and display of mallakhamb by the 47th basic course trainees.

A colourful ‘mega dance’ was presented by female trainees.