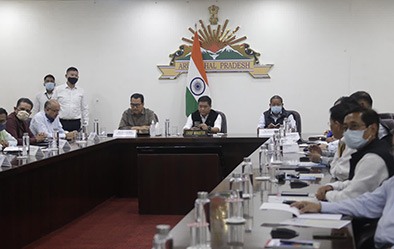 ITANAGAR, 27 Mar: Chief Minister Pema Khandu on Saturday evening formally dedicated the four-lane highway (NH 415, Package A) from Chandranagar in Itanagar to Papu Nallah in Naharlagun to the people of the state.

He, along with Deputy Chief Minister Chowna Mein, who also holds the power portfolio, also inaugurated the streetlights by remotely switching on the lights.

Khandu had on 1 October, 2020 announced to resign if said road was not completed – except for bridges and the underpass in Bank Tinali – by 31 March, 2021.

“I had full faith on our engineers, contractor and the district administration. That’s why I had made that announcement. Congratulations to all for keeping the faith alive,” he said.

“Now our next target is Package B, which is from Papu Nallah to Nirjuli, and Package C, from Nirjuli to Banderdewa,” he added.

When asked by Khandu as to the reasons, the Itanagar capital region DC informed that survey on the ground has already started and issues like compensation are being studied.

The chief minister reiterated that when the process of a project gets going, everyone should ensure that it is completed on time. He expressed regret that the project at hand shot over the scheduled time period.

“The underpass construction at Bank Tinali is causing huge inconvenience to commuters. So please ensure that it is completed by 27 April as scheduled,” he advised.

He also lauded the power department and its officials of the capital division under Executive Engineer Joram Lali for installation of the innovative ‘smart lighting’ along the highway in record time.

Khandu said that the government is now determined to “extend streetlights connectivity to all sectors of the capital.”

“I have just returned an hour ago from Vijaynagar. I travelled there by road to know the ground reality of the ever-languishing project. I have set a challenge for myself to make the Miao-Vijaynagar road motorable by 31 March, 2022,” he informed.

He further informed that soon he will travel by road to Tali, the only assembly constituency in the state that doesn’t have road connectivity yet, and assured that by March 2022, “the scenario will change.”

Mein too congratulated the officials of the highway and power departments and TK Engineering (contractor) for completing the job on time.

As a gesture of appreciation, all officials of the district administration, (including ADM Talo Potom), PWD, power, TK Engineering and Bajaj Electricals involved in the highway and lighting projects were felicitated by Khandu, Mein and Home Minister Bamang Felix. (CM’s PR Cell)