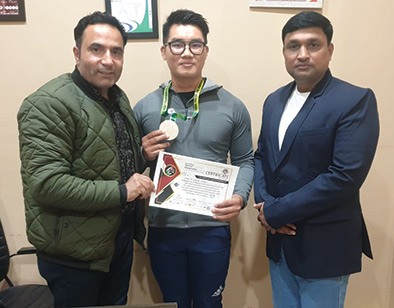 Jomoh gave his opponent a tough fight before settling for the silver with injured knees. He was defeated by a single point in the final. He suffered the injury during the semifinal.

He reached the final after defeating five of his opponents. The bouts consisted of three rounds of two minutes each.

Jomoh, who is serving the Arunachal Pradesh Police (APP) as DSP, told over telephone that he dislocated both

his knees and can barely walk. He has been admitted in a hospital in Srinagar. He suffered the injuries as he was new to the sport and did not have proper training.

All the medal winners will be shortlisted for the Asian Indoor Games to be held in Bangkok, Thailand, later in the year.

Jomoh thanked the APP Sports Control Board president DGP RP Upadhyaya and secretary Dinesh Kumar Gupta for giving him the opportunity and encouraging him to participate in the competition.

Jomoh is the first from the state to win a medal in any national Pencak Silat championship. He also has several firsts in his sports career since 2003.

A 5 Dan black belt from Japan, he is the first karate player from the state to participate in the Karate World Cup conducted by the World Karate Federation (WKF) and the first senior Commonwealth karate medallist from Northeast India to win medals thrice consecutively in the Senior Commonwealth Karate Championships.

Jomoh is the first karateka to be awarded  gold  medal twice by the state government.

He had won silver medal in the Asia Cup Karate Championships in Malaysia and had represented the country 18 times in various international events.

A 17-time state champion, he has so far won 18 medals in various official national championships since 2006.

He is a certified WKF, AKF and NF coach and has been training the children of personnel of the police department free of cost for last three years. He has also imparted self-defence training to more than 2,000 schoolgirls, besides creating legal awareness among them.