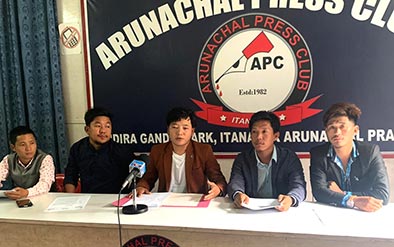 ITANAGAR, 1 Apr: Condemning the executing and implementing agencies over the collapse of the bridge at Kuwa Camp on the Yangte-Tali road, the All Kra Daadi District Students’ Union (AKDDSU) on Thursday demanded that the state government constitute a fact-finding committee to unearth the reason(s) behind the bridge’s collapse.

“It is very unfortunate that two bridges have collapsed at the same location so far. We condemn the executing agency M/s Vivek Enterprise and the Tali PWD division for the incident,” said AKDDSU president Pakyum Talop.

The union submitted a representation to the chief minister on Wednesday, demanding that a fact-finding committee be constituted to find the exact cause of the collapse. It also stated that, “if malpractice and corruption found out to be the reason for collapse, the implementing and executing agencies should be brought to justice and exemplary punishment be given to responsible persons.”

Addressing the media at the Arunachal Press Club here, Talop stated that the use of substandard and low-quality materials in the bridge could be a reason for the mishap, adding that an inquiry committee should also explore that angle.

Lauding Chief Minister Pema Khandu for ensuring timely completion of the Itanagar-Naharlagun Package A stretch, the AKDDSU president urged the chief minister to personally intervene in the matter of re-launching the bridge at Kuwa Camp.

“We appreciate chief minister for timely completion of Itanagar-Naharlagun stretch of TAH. At the same time, we would be grateful if chief minister himself physically visits the bridge collapse site to assess the ground reality,” said Talop.

The AKDDSU also stated that it has lost faith in the local contractors, especially after bridges collapsed twice at the same location. The union urged the government to hire an expert bridge construction company to maintain quality work and avoid technical errors in the future.

The union also demanded that the executing agency issue a clarification on the cause of the bridge’s collapse “through the local media.”

“It is the contractor’s responsibility to relaunch and complete in time,” the sources stated.