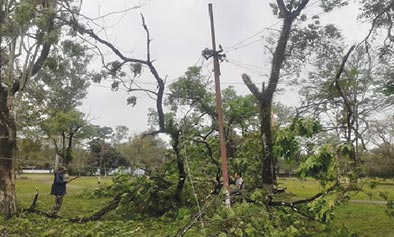 RUKSIN, 2 Apr: Electricity supply here in East Siang district has been disrupted due to devastation caused by a powerful storm that occurred in between Ruksin and Sille-Oyan on Friday morning, informed an official source in the Ruksin electrical subdivision.

According to the source, the storm severely damaged the distribution system. All efforts are being made by the department, and restoration operations are on in full swing in the storm-affected areas, including Ruksin, Oyan-Sille VKV, Rani and Sika-Bamin. (DIPRO)