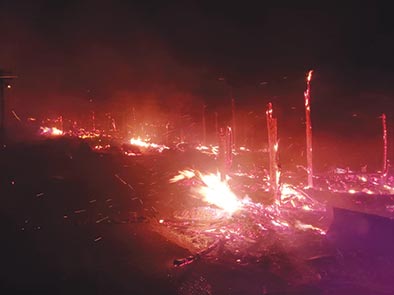 LONGDING/KHONSA, 3 Apr: Twenty-one houses and an equal number of godowns/granaries were reduced to ashes in a devastating fire that broke out in Senua Noksa village, about 4 kms from Longding district headquarters, on Saturday evening.

An anganwadi centre, a community hall and a Catholic church were also devastated in the inferno. However, the exact number of houses gutted and properties lost or damaged in the fire can be ascertained only after assessment.

There was no report of loss of life due to the fire.

the village is situated on a windy hilltop. The cause of the fire is still not known.

An immediate relief of Rs 15,000 was provided to the chief of Senua Noksa for food and shelter for the victims.

On 18 March, two persons, including a 6-year-old child, were killed in a massive fire in Longliang Village in Tirap district. The fire also destroyed more than 100 houses. (DIPROs)