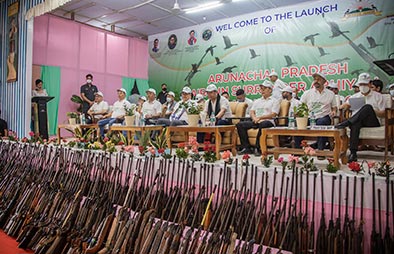 PASIGHAT, 3 Apr: Chief Minister Pema Khandu on Saturday appealed to the people of the state to stop the practice of hunting wildlife to prevent further degradation of the state’s fragile ecosystem.

“It is time for the people to change their mindset as the state’s ecosystem is under threat because of rampant hunting of wildlife,” Khandu said at an ‘airgun surrender’ ceremony at JN College (JNC) here in East Siang district.

More than 300 airguns were surrendered during the day. The locals came out in large numbers and surrendered their airguns, commonly used to hunt birds. The drive is an initiative of the state government to dissuade people from hunting and create awareness on the ill-effects of killing wildlife.

“In the earlier days, we hunted for food. But times have changed. We have food available and hunting isn’t a necessity now,” the CM said.

He said that killing of birds needs to be stopped outright, especially in Pasighat area.

“We have witnessed destruction of large areas of paddy fields in the area by pests and insects. The fact that birds control their population cannot be denied. Maybe we are guilty of downsizing the birds’ population and thus the famine-like situation,” he observed.

Khandu urged the people to take a pledge to stop consumption of wildlife meat during festivals or any other occasion.

“Till we savour wild meat, people will hunt. Until and unless we pledge not to eat wild meat, hunting will continue, no matter how many more airguns are surrendered at such events,” he said.

The chief minister also raised the issue of traditional hunting during Unying Aran, a very important festival of the Adis.

“I have specially come here to appeal to my Adi brothers, who belong to one of the most educated and socially advanced communities of the state, to do a brainstorming on the hunting practice during Unying Aran,” he said.

Khandu said that hunting during the festival is an ancient practice and cannot be stopped by any legal or government order but has to be pondered on by elders and youngsters alike.

“I particularly urge the Adi Bane Kebang to discuss the issue on a positive note for preservation and conservation of wildlife and the environment,” he said.

The chief minister appealed to the community leaders, PRI members, students, GBs and NGO functionaries to educate the people about the long-term consequences of hunting and deforestation.

Meanwhile, the chief minister congratulated Silluk village for becoming the first garbage-free village of the state.

Union minister Kiren Rijiju, who along with others accompanied the CM, said, “Arunachal Pradesh is a beautiful state with its scenic views and thick forest cover. It boasts of numerous wildlife species, and that is why a large number of tourists visit the state every year.”

Forest Minister Mama Natung said his department has taken up the airgun surrender initiative on the chief minister’s advice, which, he said, would go a long way in preventing killing of wildlife in the state.

The minister also informed that the state government will formulate a policy to ensure protection of the wildlife in the state. He, however, said the policy would not bear any fruit unless people support it.

Member of Parliament Tapir Gao requested the chief minister and the forest minister to take steps to make people surrender their firearms, including .22 rifles and barrel guns, to make the protection measures more effective.

Pasighat East MLA Kaling Moyong expressed his gratitude to the local people for realizing the importance of wildlife conservation and supporting the state government’s initiative by surrendering their guns voluntarily.

JNC Principal Dr Milarai Modi submitted a memorandum to the CM, seeking funds for the construction of a well-equipped auditorium and a girls’ hostel in the college campus.

Earlier in the day, the chief minister along with Rijiju inaugurated Block II and Block III of the JNC’s boys’ hostel. Khandu had sanctioned the projects during his visit to the college in 2017. He also inaugurated the administrative building of the upcoming Arunachal University. (With inputs from CM’s PR Cell)