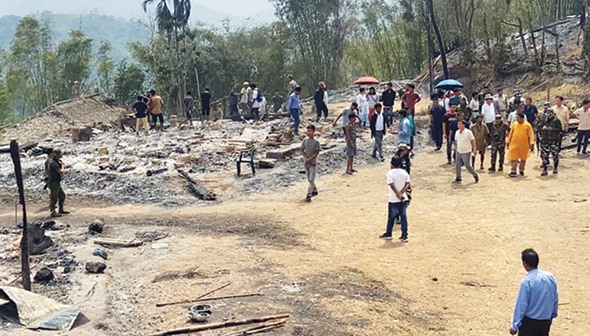 The DC assured the affected families of all help for their quick rehabilitation.

Each affected family was provided Rs 3,800 as immediate relief by the district administration, in addition to rice.

Lego advised the villagers to use CGI sheets instead of the traditional roofing materials, which are prone to fire. He also informed that a committee would be formed to oversee the relief and rehabilitation of the affected families.

As per the latest report, the fire rendered 40 families homeless.

Seven more dwellings were also partially damaged in the effort to stop the further spread of the inferno.

Though the actual cause of the fire is still not known, the villagers believe the fire started from the hearth (fireplace) of an unattended house.

MLA Wangnaw urged the villagers to keep safe and adequate distance between the houses whenever the new construction starts.

While distributing CGI sheets to the affected families, the MLA said more CGI sheets would be arranged on need basis as and when required. He also informed that his party is making all endeavours to arrange essential items, like food and clothing for the affected people.

The HoDs of Longding and the Wancho Students’ Union also provided relief and other essential items to the victims.