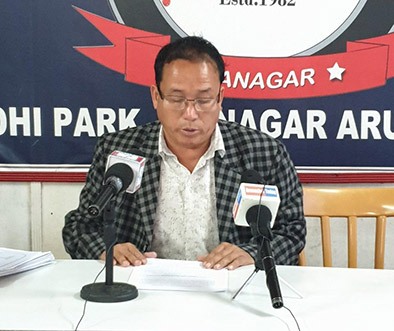 ITANAGAR, 4 Apr: Social activist from Upper Subansiri district, Dosh Dasi on Sunday appealed to the Tourism department for an extension of his lease agreement on the Mell Botom Tourist Lodge for up to 10 years as per the government leasing policy.

In a press conference held today, Dasi claimed that he had revived the non-functional Mell Botom Tourist Lodge just after a lease agreement with the department under Public-Private Partnership venture (PPP). He also claimed that he was busy in expanding and refurbishing the dilapidated tourist lodge and could not get sufficient time to run the lodge.

“I have given my full five years of time for promotion of tourism in the circuit, including organising several programmes like painting and drawing competitions in the district. In view of that, the state government should consider my application for extension of the lease agreement,” Dasi added.

However, the Tourism department clarified that the lease agreement with Dasi on Mell Botom Tourist Lodge has expired, and accordingly, the department has issued a notification to float tender for a lease agreement.