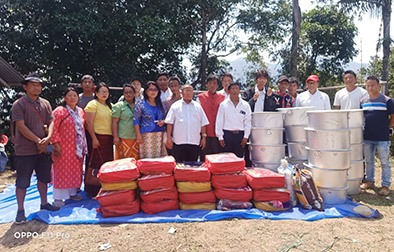 SENUA VILLAGE, 6 Apr: Relief items like blankets, utensils, cloths for children and cash for victim families were handed over to the chief and goan burah of Senua village by a team of Wancho Council (WC) which visited the village here in Longding district on Tuesday.

The village chief appealed to the WC and state government to help them in availing the government’ assistance for early relief of the poor villagers.

The WC on its part, assured to help victim families in recovering the loss officials documents. The members also appealed to the state government to help the villagers under various schemes of the government, like ‘Sarkar Aapke Dwar’ on priority.