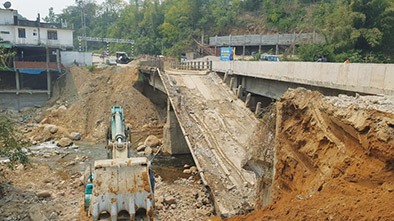 ITANAGAR, 7 Apr: The process of dismantling of an old single lane bridge over the Senki River here at Chandranagar started on Wednesday.

In place of the old bridge, a new double lane bridge will be constructed as part of the Chandranagar to Papu Hill four lane road project.

Briefing the press, PWD Highway Itanagar sub-division, JE Binu Waii Tachang informed that it will take a minimum of one week to complete the dismantling process.

“As soon as dismantling is done the foundation work will start. If everything goes as per plan and the weather supports us, the bridge will be ready within three months. It will also have footpath facilities,” she informed.

The project manager of TK Engineering, Pranjal Hatimota said the new bridge will have the same feature as the existing double lane bridge.

He also said that the company is ready for any restoration and repairing during the monsoon season.

“We expect landslides during the monsoon as earth cutting was done in the winter in some of the stretches and accordingly we are ready for it,” he said.

Itanagar-Capital Region Deputy Commissioner Komkar Dulom was hopeful that the bridge will be completed on time.

“Besides this bridge over the Senki River, another bridge is coming up near the DC’s office. The work is progressing in full swing and will hopefully be completed soon,” he said.

The DC also expressed confidence that the underpass at Bank Tinali will be completed at the earliest.

“The TK Engineering has been given time till May to complete the underpass.  We are hopeful it will be completed on time if weather supports. There might be a delay of a month if there are disturbances due to the weather,” he added.

The DC further urged the people of the capital to protect public properties like roads and newly installed street lights.

“I have received a report of a few youths deliberately damaging the newly installed street lights. I appeal to the citizens not to damage public utilities and to avoid putting up advertisement bills and posters on electric poles. Unless the citizens protect these properties, the government alone cannot improve the condition of the capital,” he said.

The DC also informed that a plantation drive would start soon in sectors to improve the green coverage of the capital under Hamara Arunachal Abhiyan.