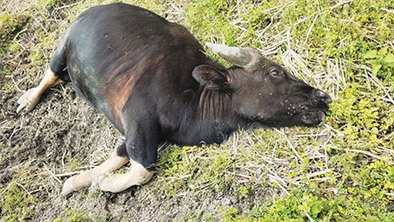 ITANAGAR, 7 Apr: There are reports of mithun deaths following the outbreak of foot and mouth disease (FMD) in Upper and West Siang districts.

Deaths have been reported from Ramsing and Simong villages in Upper Siang, according to villagers that this daily spoke to.

However, the department of animal husbandry and veterinary says that though there have been reports of outbreak, it has not been informed of deaths.

Joint Director of the department, Dr Tachi Taku said that five villages in Upper Siang and two in West Siang have reported outbreaks of FMD.

He said that the department has engaged vets to contain the spread of the disease.

One of the employees of the department in Upper Siang said that there are reports of mithuns dying of the highly contagious disease.

He says that vaccination is being given but “it will not help the mithuns that are already infected by the disease.”

He said that since mithuns are mostly in the forest, it is difficult for the villagers to get them vaccinated whenever the department organizes vaccination.

“They come to us after the mithuns are already sick with the virus,” he said.