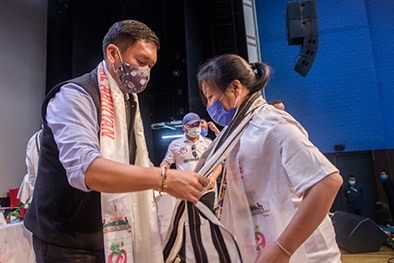 ITANAGAR, 9 Apr: “A sense of ownership among citizens is a must for making Itanagar a better city, besides government efforts,” Chief Minister Pema Khandu said on Friday while attending the launch of the sectoral team for a clean, green, safe, secure and serene Itanagar, which is being organized under the Hamara Arunachal Abhiyan (HAA).

He said that “the HAA movement is intended to generate this very feeling of ownership across tribes and population, building the spirit of Team Arunachal.”

Khandu welcomed the participation of IMC corporators in the HAA movement.

“To make Itanagar the cleanest city is certainly challenging but not impossible,” the CM said, and added that the motive of the HAA campaign in Itanagar “is to put the city amongst the top five cleanest cities in India from its 2020 Swachh Survekshan ranking of being 7th most dirty.”

He informed that manpower shortage in the two smart cities of Pasighat and Itanagar is being addressed, and funds are being earmarked for improvement of solid waste management.

The CM further promised to improve the internal roads

in the capital city under the Chief Minister’s Comprehensive Road Network Plan, with streetlights in all colonies. He also appealed to the people to discourage rampant illegal earth-cutting in Itanagar.

On the rising Covid cases across the country, the CM informed that the state will be observing ‘Tika Utsav’ from 11 to 14 April. He appealed to the people to encourage citizens aged 45 years and above to get themselves vaccinated and not to believe in misinformation regarding the Covid-19 vaccine.

On the drug menace, the CM lamented that government employees, particularly police personnel, are reported to be involved in addiction and drug trafficking.

“A timeline will be given to all police personnel to voluntarily get tested for illegal drugs to be treated and rehabilitated,” the CM said, adding that, upon expiry of the deadline, random drug tests will be conducted and those found positive will face strict action.

He appealed to the home and the police departments to take urgent measures to help curtail it, “first within the department, and then from the society.”

The CM also appealed to the people to fight against drugs, and expressed concern that if they fail to act, the state would be devastated by it.

“By 2022, while the entire country celebrates India’s 75th Independence Day, Arunachal should be able to declare itself as a drug-free state,” the CM said.