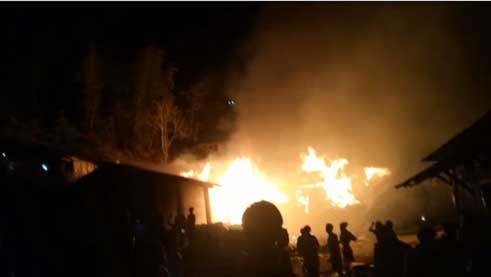 LONGDING, 11 Apr: In yet another fire accident in eastern Arunachal, five houses were reportedly reduced to ashes in Wakka village in Longding district on Sunday evening.

Sources informed that the fire broke out at around 5:30 pm and engulfed five houses within no time.

According to reports, two people sustained injuries when a gas cylinder exploded. However, no human casualty was reported.

The sources also informed that the villagers had to dismantle a few houses nearby in order to prevent the fire from spreading. The villagers later managed to douse the fire, the sources added.

This daily could not get confirmation from the district administration regarding the incident.