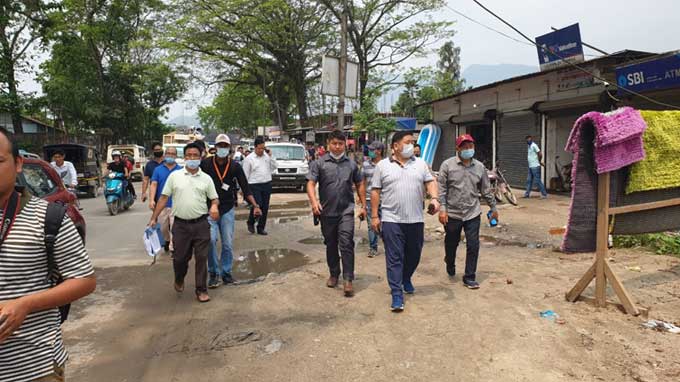 ITANAGAR, 13 Apr: The capital administration on Tuesday started re-verification of all the structures falling under Package B (Papu Nallah to Nirjuli) and Package C (Nirjuli to Banderdewa) of the Itanagar-Banderdewa four-lane road project.

Later, speaking to the press, the DC informed that the assessment of compensation was done in 2016 itself. “We are only re-verifying, so that fake beneficiaries should not get compensation and only genuinely affected people get compensation. If everything goes as per the plan, by the end of this month we will disburse compensation,” said the DC.

He made it clear that structures falling under the RoW will not be paid compensation for. Further, the DC said that the administration will give time for self-demolition of the structures. “We will also provide funds for self-demolition. However, it will be paid only after proper verification,” he added.

Tath informed that maintenance of NH 415 from Papu Nallah to Nirjuli will start soon. “As part of maintenance, carpeting will be done in phases,” he said.

He said both the firms which have won the tender bidding for Packages B and C have started the ground work.

“Package B from Papu Nallah to Nirjuli is 11.5 kms and the cost is Rs 340 crore. It has been awarded to the joint venture of Shivam and Goodwill Construction Limited. Agreement was signed in January,” informed Tath.

“After the land acquisition is completed, the appointed date will be fixed and after that, work will start,” he added.