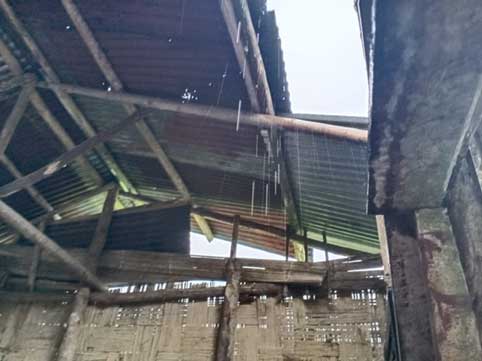 Many houses were destroyed in the heavy storm which was accompanied by hailstones which penetrated the houses and destroyed private residences, including OBT buildings and many kutcha houses in different villages.

The numbers of destroyed houses and affected families are yet to be ascertained as many of the villages are located in remote areas. Several electric poles and trees between Panyimiri Nuk and Mebigeko in Dumporijo constituency fell down due to the heavy storm, leading to cutting off of electricity in the area. The villages are reeling under darkness and the villagers have appealed to the authority concerned to immediately restore the electricity supply.

Local MLA Rode Bui visited the affected areas on Tuesday along with officials of the district administration to meet the affected families and asses the properties damaged.

West Siang DIPRO adds: In West Siang district, Sesi Likar village in Kamba circle was hit hard by a storm that swept across the village at around 5 pm on 12 April.

A few people were reportedly injured during the storm, and one person who was severely injured has been referred from the Kamba CHC to the general hospital in Aalo for further treatment.

Many houses are reported to have been damaged.

Kamba CO Jumyir Ronya Kato, ZPM Damli Niri, the PS OC and others rushed to the affected village to take stock of the situation. The team heard the grievances of the villagers and assured to “tie up with higher authorities to address their woes.”