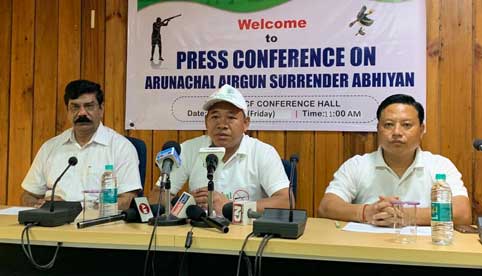 ITANAGAR, 16 Apr: Environment & Forests Minister Mama Natung on Friday appealed to all the stakeholders in the state to join hands in saving wildlife and forests in the state.

Addressing a press conference here along with MLA Kumsi Sidisow and Principal Chief Conservator of the Forests RK Singh, Natung said that the tribal people’s lives have long been dependent on wildlife and forests and, “without realizing the impact on climate change and global warming, the tribal people indiscriminately cut down forests and kill wildlife.”

“Now is the time for us to protect wildlife and stop unabated felling of forest trees, as it has greatly impacted on global warming,” said the minister. He said that, even if a person fells trees, they should plant more trees in return.

Natung also hailed all the people who voluntarily surrendered their airguns and rifles.

Natung acknowledged the role of the divisional forest officers, range officers, supporting staff, panchayati raj members, gaon burahs, student leaders and district administrations in making the ‘airgun surrender mission’ effective and successful. He also lauded the role of the legislators who supported the movement wholeheartedly, and further appealed to them to “support continuously to protect the forests and wildlife.”

On being asked to control illegal timber operations, the minister said the DFOs concerned are “actively taking action against illegal timber smugglers.”