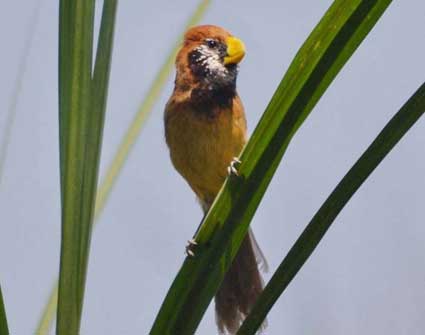 During the survey, the researchers observed rare and endangered birds such as the black-breasted parrotbill (Paradoxornis flavirostris), the marsh babbler (Pellorneum palustre), Jerdon’s babbler (Chrysomma altirostre), and the Indian grassbird (Swamp prinia) in the periphery of the wildlife sanctuary. Further, they noticed movement of three species of vulture and the endangered Bengal florican (Houbaropsis bengalensis), which is already listed as critically endangered on the IUCN Red List.

Pasighat DFO (WL) Tasang Taga said the bird survey was part of a “regular exercise of the ornithologists, who are doing research and documentation on rare and endangered avian species throughout the country.”

Taga informed that another team of researchers from the Bombay Natural History Society is camping in DEWS, conducting study on the terrestrial and aquatic birds there. The four-member team of scientists earlier conducted training for wildlife staffers and taught them about watching birds and maintaining the birds’ habitats.

Taga expressed hope that systematic study of the birds and other wild species in the wildlife sanctuary would help the department in formulating a policy for conservation.

It may be mentioned here that a large number of researchers, students and tourists from different parts of the country and abroad visit the wildlife sanctuary every year to see the rich birdlife during the winter season.

DEWS is located 16 kms southeast of Pasighat town in East Siang district. The sanctuary is a set of small and medium islands amid the Siang and Sibiya rivers flowing down from the northern hills, providing a model habitat for wildlife to thrive on.