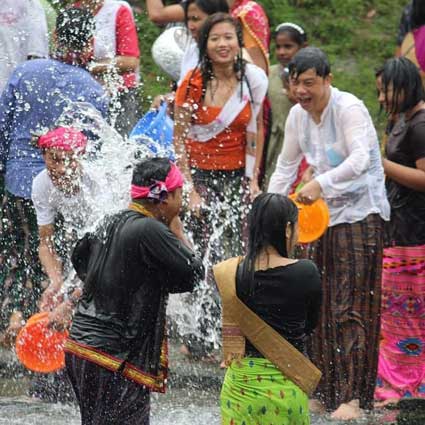 At Empong, Mein announced to develop the area to boost tourism.

Attending the ‘maha Sangken celebration’ at Kongmukham on Thursday, Mein said the celebration “provides a platform for the people to preserve, protect and pass down age-old traditional culture to the next generations.”

Regarding development of tourism in the district, Mein said: “Our state has huge potential to become one of the most sought after tourist destinations in the country and the state government is putting all efforts to boost the tourism sector in the state.”

“In and around Namsai district, we can develop a micro-tourist circuit where tourists can pay a visit to the Namdapha Wildlife Sanctuary, the Manabhum tropical rainforest, Bhismaknagar, Glow Lake, Parshuram Kund, the World War II memorial in Jairampur, and various other nearby places,” he said.

He also announced that soon a Buddhism tourism circuit from Tuting to Chowkham, Tawang and Namsai will be developed, “which will greatly help boost tourism revenue of the region.”

Earlier, Mein inaugurated the Kongmukham welcome signage and released an audio-video album Ya Hei, Ya Hai, produced by Society for Tai Ahom Resurgence, and a documentary, Sojurn to Khamtiloung, co-directed by Maw Tai Films & Tan Mansai Photography, and another audio video album, Fra Tra, produced by the Tai Khamti Heritage and Literary Society.

Sangken was also celebrated with traditional gaiety in different parts of the state.

In Itanagar, the festival was celebrated at the Theravada Buddhist temple. (DCM’s PR Cell)