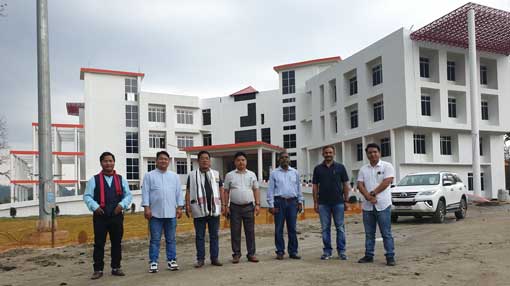 KIMIN, 18 Apr: The state’s DBT-APSCST Centre for Bioresources and Sustainable Development, constructed here in Papum Pare district, is likely to be inaugurated on 24 April.

Arunachal Pradesh State Council for Science & Technology (APSCST) Chairman Bamang Mangha informed the press that a team of officers of the department inspected the site here on Sunday to get an update on the progress of the work on the building.

“It has been found that the most of the work is completed and finishing touches are being given. Union Science & Technology Minister Dr Harsh Vardhan is likely to inaugurate the project,” he said.

The foundation stone of the project had also been laid by Dr Vardhan. “This centre will cater to the needs of biotechnological intervention in conservation and sustainable utilization of bio-resource toward improving the socioeconomic status of the people of Arunachal Pradesh,” said Mangha.

The scientists, officers and officials of the centre will carry out several studies and research works in the state-of-the-art building.

Director CD Mungyak said that all the systems are being upgraded and laboratories are also being set up as per the feasibility.

Project director Dr Debajit Mahanta informed that all the scientists from across the region will take part in research works on several bio-resources of the state. “The research works will also take place keeping in view the huge presence of natural resources, flora and fauna, herbal and medicinal plants,” he said.