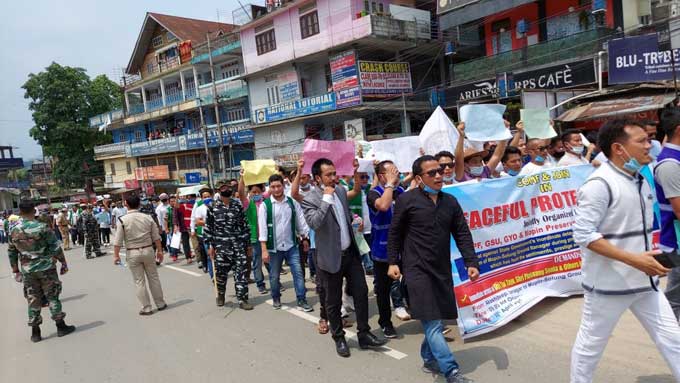 ITANAGAR, 18 Apr: Protesting against inaction by the police department over the alleged vandalism of the Mopin ground, the Galo community organized a massive protest rally on Sunday, demanding immediate arrest of the accused who vandalized the Mopin ground.

Various Galo community-based organizations, such as the Galo Welfare Society, the Galo People’s Federation, the Galo Students’ Union, the Galo Youth Organization, the Mopin Preservation Society, etc, joined the protest rally which started from Akashdeep and culminated at the Mopin-Solung ground here.

Addressing media persons, Mopin Preservation Society Itanagar general secretary Goge Sora claimed that on 1 April, one Tai Tayu and Phassang Senia along with 15 other accomplices armed with machetes and lathis disrupted the Mopin preparation by damaging the sound system at the Mopin-Solung ground and threatened the organizing committee.

A case (No 79/2021) has been registered at the Itanagar police station, but the police authority is yet to arrest the alleged accused.

“Even after 16 days have passed, it is unfortunate that our capital police could not even trace the whereabouts of Tai Tayu and Phassang Senia. With this sentiment, we are protesting here today,” said Sora.

“Tai Tayu is sending threat video to the Galo Welfare Society president, which compelled us to keep security. This is an insult to the entire Galo community,” Sora said.

“Mopin celebration is an identity of the Galo community. How could they have challenged us? To express our sentiment, we have also submitted a written representation to the chief minister and the home minister,” he added.

Sora further sent a clear message to the government that it should not undermine the Galo community’s sentiment. He said that if the authority fails to act, the Galo community would resort to a rigorous democratic movement. He also appealed to all communities, including the Arunachal Indigenous Tribes Forum, to look into the matter and understand the sentiment of the Galo community.

Meanwhile, Capital SP Jimmy Chiram said that the police department is making every effort to track down the culprits, considering the sensitivity of the case.