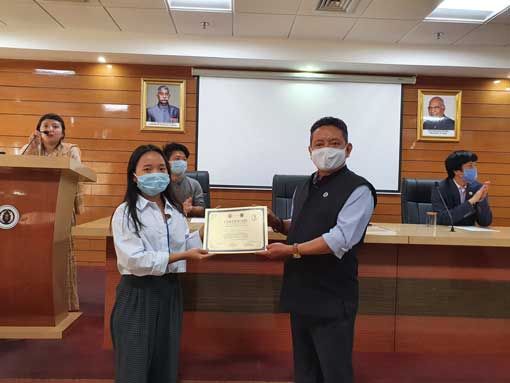 Thirty-eight artists, including 20 juniors, took part in the painting competition during the four-day art exhibition organized by the Arunachal Akademi of Fine Arts (AAFA) in collaboration with the APLA to mark the World Art Day at the assembly secretariat here.

Attending the concluding ceremony on Sunday, Legislative Assembly Speaker Pasang D Sona gave away the prizes to the winners.

The speaker reiterated that the state assembly is committed to promote homegrown talents, “especially their creative and art works.”

Sona informed that, for the last few years, “the state assembly has involved and put in local talents in creative works of the assembly.”

Praising all the artists for showcasing their works in the art exhibition, Sona said: “Each painting and artwork carries some meaning which is appreciable beyond words.”

“Unlike text, where we write so many things to pass a message, painting is a good medium to express one’s view,” the speaker said, and suggested to the artists to use their artworks “to create awareness on social causes and also reflect contemporary issues.”

Among others, the closing ceremony was attended by Legislative Assembly Secretary Kago Habung and AAFA president Gyamar Nanam.