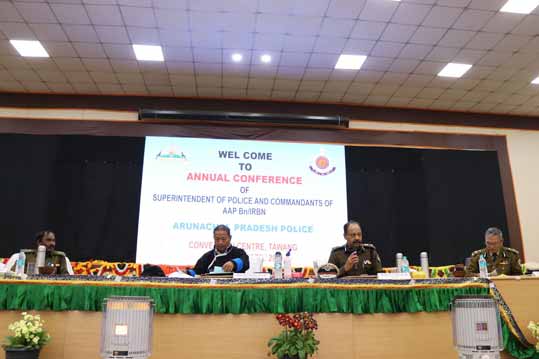 TAWANG, 21 Apr: Home Minister Bamang Felix instructed the Superintendents of Police (SPs) to form an exclusive team to fight against drug menace, as “one of the key missions of the home department would be to save the future generations from drug addiction.”

Addressing the police officers on the concluding day of the three-day annual conference of the SPs and commandants of AAPBn and IRBn of the state here on Wednesday, Felix, however, said “the government employees must be free from drug addiction first as charity begins at home.”

The home minister also directed them to review the present Covid-19 situation and work as a team with the SPs in the border areas where there are points of entry to the state.

Expressing satisfaction over the good team work being shown by the state police, he said, “A police constable serving in the lowest level of hierarchy and the Home minister at the top-both are equally important for the department. If anything goes wrong at any level the entire system collapses; they are all interlinked and interdependent.”

During the three-day conference,  all the officers had the opportunity to share their ideas and views. Their suggestions would further be placed before the higher authorities through the Home minister during government policy making.

Earlier, Director General of Police RP Upadhyaya apprised the minister about the important matters that were discussed in the three-day long annual conference. (DIPRO)