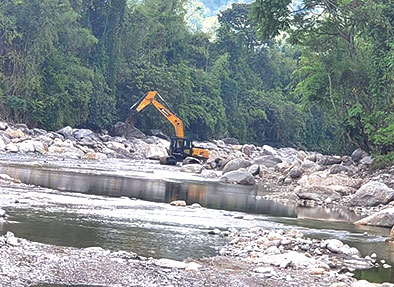 SANGDUPOTA, 23 Apr: The geology & mining department has warned of legal action against anyone who is found involved in illegal extraction of natural resources and illegal activities in un-notified areas.

Geology & Mining Assistant Director Tassar Talo informed that, on receipt of information about illegal extraction of natural resources in Poma, Rakap, Jote and nearby areas of Sangdupota circle in Papum Pare district, a team of officers led by Sangdupota circle executive magistrate Takam Nicholas along with elected panchayat leaders carried out a surprise inspection in the Poma river area and stopped several extraction activities.

Talo urged the people not to indulge in illegal mining activities which create ecological imbalance and revenue leakage.

He informed that, during the surprise inspection, it was found that several illegal mining activities were going on at the Poma river. The team on arrival found that heavy earthmovers were also deployed to extract boulders, sand gravels, etc, and other mining materials from the Poma river.

Talo termed such illegal activities a grave threat to the Poma river.

“The department has already notified several areas for extraction of mining materials for commercial purposes, and therefore illegal and unauthorized acts will not be tolerated,” he said.

Action will be initiated as per the APMMCR 2020 against defaulters, he warned.

Panchayat leaders of Poma, Rakap and Jote, along with APPSU leaders, GBs and other youth leaders of the area accompanied the team during the surprise inspection.