ITANAGAR, 24 Apr: With the Northeast region experiencing early monsoon rains, the executing agencies for the Potin-Pangin stretch of the Trans-Arunachal Highway (TAH) are racing against time to catch up with the deadline of completion, which is 2023, as per the agreement.

The Potin-Pangin stretch of the TAH is 407 kms long and covers six districts. The construction of the road took more than a decade to take off after it was marred by the land compensation scam worth crores rupees, resulting in the arrest of the former Lower Subansiri deputy commissioner, the PWD AE, the Lower Subansiri DRLSO and many others for their alleged involvement in the scam.

The infamous Potin-Pangin TAH is part of an ambitious project under the Special Accelerated Road Development Programme (SARDP-NE), an initiative for the development of road networks in the northeastern states of the country under the ministry of road transport & highways (MoRTH).

In 2011-2012, the bid for the Potin-Pangin stretch was awarded to ECI Pvt Ltd, a Hyderabad-based company. However, the district administrations got into a slugfest over the land acquisition process and thus failed to hand over encumbrance-free land, viz, forest clearance, public compensation, utility shifting, etc, resulting the company being unable to execute the work on time.

Later, the company sublet the work to TK Engineering in December 2016, after four years of non-execution. However, the controversy over land compensation was not over yet, which forced TK Engineering to back out.

It is said that several meetings were held between the MoRTH and the concessionaire, which didn’t come to much, and the ministry terminated the contract agreement on 15 November, 2018. The ministry entrusted the state PWD to prepare DPRs for nine packages, which were submitted to the ministry in September 2018.

After the approval of the DPRs of nine packages, the ministry started floating tender from February 2019 by dividing the road into nine packages of 30 to 40 kms in length.

The Arunachal Times has accessed a copy of the monthly progress report (MPR) prepared by the PWD highway chief engineer on 13 April, 2021, which was submitted to the MoRTH’s regional officer. According to the MPR, Package 5, which falls partly in Kamle district and partly in Upper Subansiri district, has the lowest physical progress report (PPR) with 3.20 percent.

Package 9 in Siang district has a PPR of 6.19 percent and Package 3, which falls in Kamle district, has 8.31 percent PPR. The state PWD highway department claimed that the low percentage of PPRs was due to late commencement of the work.

There has been a noticeable progress of work on Package 2 (33.60 kms), which falls in Lower Subansiri district, with 45.25 percent, followed by Package 7 with 21.91 percent in PPR.

In an interview with The Arunachal Times, Chief Minister Pema Khandu vowed to meet the deadline to complete the project.

“I am focusing on the connectivity sector, and the Potin-Pangin stretch of the TAH being one of the most important roads should be completed on time as per agreement between contractor and executing agency,” he said.

“To achieve the completion target, I am taking regular review meetings on progress of the road in all nine packages,” Khandu added.

The Potin-Pangin road was originally constructed by the BRTF during the ’70s as an ODR standard road. This road passes through hilly topographical terrain in the middle belt of Arunachal.

With the completion of the double-laning of the road, Itanagar will have direct access to the district headquarters of Ziro, Daporijo, Raga, Basar, Pangin, Aalo, etc, from where commuters can avail intra-state travel without touching Assam as is being done presently. 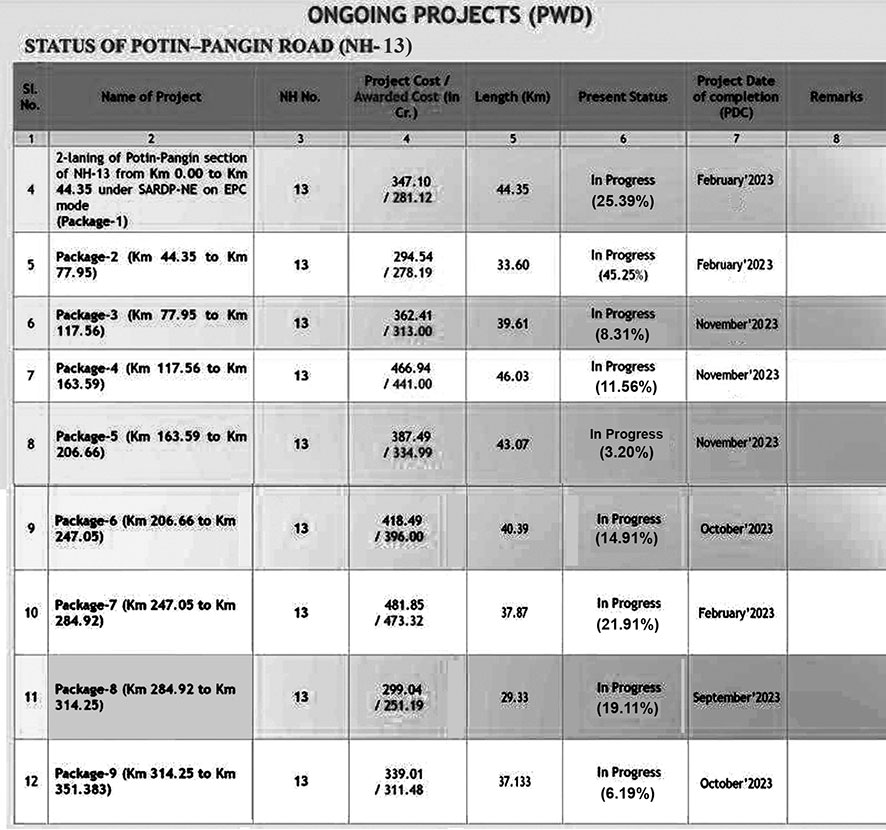