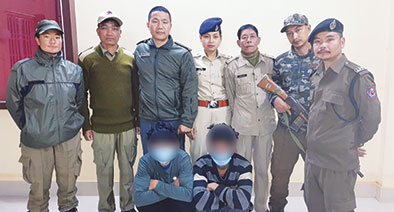 ZIRO, 24 Apr: One Kago Tade (30) and Arjun Sahani (23) were arrested by the Lower Subansiri police from Hong village on Saturday for the gangrape of a 15-year-old girl.

Ziro DSP Tasi Darang informed that a complaint was received by the women’s police station on 21 April that two unknown persons had abducted a minor girl from her home in ADC Colony, Hapoli, on 19 April.

“On 22 April, the girl managed to reach her home at around 12:35 am in an injured condition and narrated the incident to her guardian that she was taken in a white colour car via Club Road, Hapoli and was confined and raped repeatedly by a duo on 19 and 20 April,” the police informed.

As per the statement provided to the police, the minor said that the duo threatened to kill her if she informed about the matter to anyone.

During investigation, the victim was unable to show the place of occurrence or provide the vehicle’s registration number.

“She could only inform the police that one of the alleged accused is a non-APST with curly hair; that she was abducted in a white car and was confined in an Apatani-style kutcha house where she was repeatedly forced into sexual intercourse at the house as well as in a paddy field,” the police informed.

Since the victim was unable to provide sufficient information to reach the place of occurrence, SI Mirip observed over a hundred CCTV camera footages and found significant leads.

SI Mirip, along with Inspector M Lalyang and a team from the Ziro police station traced out the vehicle involved in the crime – a white Xylo bearing registration number AR-01K-1048.

Subsequently, on 24 April, the police managed to locate the vehicle and the two suspected persons in Hong village.

The duo has reportedly admitted to the allegations in the FIR.

The police also discovered the place of occurrence and recovered the belongings of the victim from there. The vehicle involved in the crime has also been seized.

One of the alleged accused, Tade, has a criminal background with several heinous cases registered against him, like murder and assault, at the Ziro police station.

Lower Subansiri SP Harsh Indora said that “the police have sufficient evidence against the accused persons.”

“It was a blind case for the police as the victim was unable to provide any input on the vehicle number, name of accused or place of occurrence. Yet, under the able supervision of SP Harsh Indora and sheer determination of Sub-Inspector Pansam Mirip and her team, along with the support of the OC PS Ziro, Inspector Millo Lalyang, the case was cracked within two days,” the DSP added.