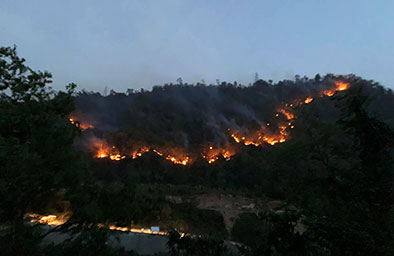 ITANAGAR, 2 May: A massive forest fire reportedly broke out near Hoj in Papum Pare district on Saturday evening.

The fire engulfed the entire hill near the Hoj bridge and ravaged the forest. The blaze reportedly continued for at least 13 to 14 hours. However, no human casualty and loss of property were reported.

Sources informed that the fire originated in the jhum land of Hoj Gaon Burah. Later, it spread uncontrollably, fanned by wind.

Neither the local administration nor the district police were aware of the forest fire.

When contacted by this daily, the Toru circle officer said that she was not informed about the incident. The Papum Pare district police also stated that the incident was not reported to the police.

This daily could not contact the divisional forest officer in Sagalee for his comment on the incident.