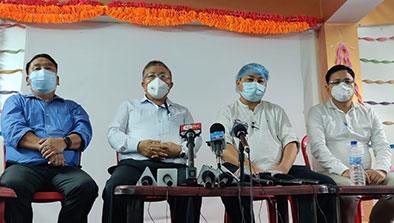 ITANAGAR, 6 May: The medical community here on Thursday stated that it would continue its agitation as a mark of protest against the vandalism and alleged attempt to lynch Drs Tuba Muri and Nabam Jadav of Samaritan Hormin Hospital in Naharlagun by the family members of a deceased patient on 3 May.

The IMA-AP and the APDA, however, said that the proposed two-day agitation would be reduced to “one day or hours” after consultation among their members. The medical community also stated that it would ensure that the agitation does not affect emergency and Covid services in the hospitals.

the entire medical fraternity and such incidents recur across the state. The doctors and medical staffers are always at the receiving end.”

The APDA president informed that the medical community has taken a decision in unison to call a strike as a mark of protest against the incident.

Dr Rumi informed that the health minister invited the doctors to a meeting, which was attended by the advisor to the health department, the health secretary, the IGP and the ICR SP. He said that “the government has taken the incident very seriously and assured to take cognizance under the Arunachal Pradesh Protection of Medical Service Personnel and Medical Service Institutions (Prevention of Violence and Damage or Loss of Properties) Act, 2019.”

The APDA president added that the government also assured to create a safe environment for the medical community, and to engage police personnel to create awareness on the Medical Service Personnel Act.

IMA-AP president Dr Lobsang Tsetim in his address said the incident has shaken the medical community.

“The senior and able doctors who have experience of 1,000 surgeries are shivering now and physicians who saved thousands of lives are numbing after this incident,” he said, and appealed to the public to treat them (doctors) like humans by creating a safe environment.

Dr Tsetim clarified that the proposed two-day agitation “is a token of democratic means to register protest over the incident without placing any demands.”

However, he said, the people should understand that they cannot take the law into their own hands.

“No doctor wants his patients to be dead. We understand that there are complications in surgery, which leads to emotional outburst among relatives of the patients. But taking the law into their own hands and assaulting doctors are nowhere justified in a civilized society. If the doctor is guilty, there is a law to take action,” said Dr Tsetim, and urged the people to create a safe environment for the doctors.

The medical community also released the CCTV footage showing the family members of the deceased attacking Dr Tuba Muri and Dr Nabam Jadav inside the hospital.

Meanwhile, the state unit of the Trained Nurses Association of India has also condemned the incident and expressed solidarity with the doctors. The association stated that it was sorry about the loss of a precious life, but condemned the mob attack against the doctors.