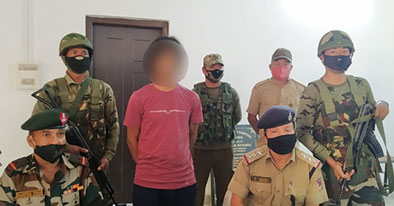 NAMPONG, 11 May: The 19 Assam Rifles and the Changlang police have arrested an NSCN-IM operative, identified as self-styled (SS) sergeant Anong Singpho alias Nongpion (29), a resident of Inthem village in Tinsukia (Assam).

Based on input regarding movement of NSCN-IM operatives in Nampong area, the 19 Assam Rifles and the district police launched a special operation at Therimkhan village on 8 and 9 May.

The team carried out a search operation in a suspected house, from where the individual was apprehended. During interrogation, the person identified himself as an SS sergeant of the NSCN-IM.

A criminal case has been registered at the Nampong police station and further investigation is underway, Changlang SP Mihin Gambo informed.

He appealed to the government and the security forces to “initiate motivational measures in village level, so that the insurgents can surrender and join the mainstream.”

SDS secretary-general Ongyun Maio also expressed appreciation for the Assam Rifles and the police for nabbing the operative.

“He had been continuously giving sleepless nights to our Singpho leaders,” he added.